In the year A. D. 62 a certain Roman citizen was cast into prison because of a multitude of accusations against him. At his hearing before Festus he appealed to Caesar for justice, and was held for trial at Rome.

Shortly afterward he was asked to state his defense before King Agrippa and Bernice, who were then visiting Festus. That defense, uttered by Paul for he was the accused prisoner is found in the twenty-sixth chapter of the Acts of the Apostles, and is one of the greatest addresses to be found in the Holy Scriptures.

At the conclusion King Agrippa said to Paul: "Almost thou persuadest me to be a Christian" to which Paul replied, "I would to God that not only thou, but also all that hear me this day, were both almost and altogether such as I am, except these bonds."

A clergyman by the name of Brundage was once preaching upon this subject and concluded his sermon with these solemn words: 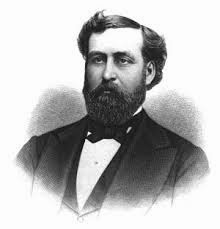 "He who is almost persuaded is almost saved, but to be almost saved is to be entirely lost." Philip Bliss was present and was so deeply impressed by these words that he wrote one of his most helpful hymns, based on the phrase "almost persuaded," as a direct result of this sermon. During the Moody revivals many souls, almost persuaded, were helped by the appeal of this hymn to decide for Christ before it was too late.

Philip Paul Bliss was born on July 9, 1938 in Rome, Pennsylvania.

His father, Mr Isaac Bliss, was also a lover a music and this it was from him that the young Philip developed his passion for music. However the thing that he still fondly remembered of his father were the daily family prayers.

Other hymns that he wrote include, "Jesus Loves Even Me"; "Hallelujah, What A Savior"; "Wonderful Words of Life"; "Let the Lower Lights Be Burning"; Hallelujah 'Tis Done!" and "Dare to Be a Daniel".

Unfortunately his productive life was cut short at the age of 38 on December 29, 1876 at Ashtabula, Ohio.

He died in a train crash. At that time, on 29 December 1876, the train he and his wife were travelling was in the process of crossing a bridge when the bridge unfortunately collapsed.

Some carriages fell into a ravine but somehow Bliss escaped from the wreck but went back to rescue his wife while the carriages were burning. They perished together in the fire and their bodies were never found.

They left behind two sons aged four and one.

During the recovery process they found Philip's trunk which contained lyrics of a song he had written but without a tune. The song is, "I Will Sing of My Redeemer." The Tune was added by  James McGranahan, another famous composer.

Video of this Hymn, Almost Persuaded, Now To Believe Hymn